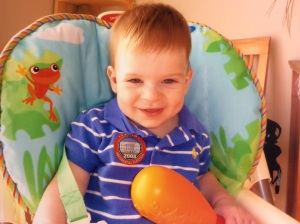 The boy was born in Iowa. In an election year. Presidential politics are in his blood. No, he didn’t actually vote, but he did help me canvas the neighborhood the day before. (Cutest pollster around!) The afternoon he spent in the stroller – smiling at strangers, engaging in conversation, and, yes, the occasional door shut in our faces – was his first lesson in democracy: Get involved. The next day in the voting booth was his second: VOTE. (You’ll get a sticker.)

Seven years have passed since the start of our civics course, but last night was lesson number three. There was a tremendous amount of excitement and energy in Charleston as Bernie Sanders was coming to town. Hundreds were expected, then thousands – the venue changed two times to accommodate the crowd.

We considered going, but truth be told, I thought it would be too exciting for him. One of the things I love most about him is his enthusiastic compassion – if something touches his heart, he’s ready to contribute all his birthday savings on the spot; give every minute of his free time over to the cause. I could totally see him going home and plastering his school folders and notebooks with “Feel the Bern” stickers.

But the lesson I wanted to teach was: Due diligence.

So last night, we had dinner with Bernie instead… well, sort of. We found a livestream of the rally, propped it up on the dinner table, and explained what we were listening for:

So we listened, and we talked (and we ate). And then he asked: “Do all the presidents [sic] have a chance to share their ideas like this?” … and I was thrilled.

A+, son, A+ – not only did you pay attention to the lesson; you understand the homework.