Since a week already feels like a year, I figured I might as well cover a whole year in this week’s read. 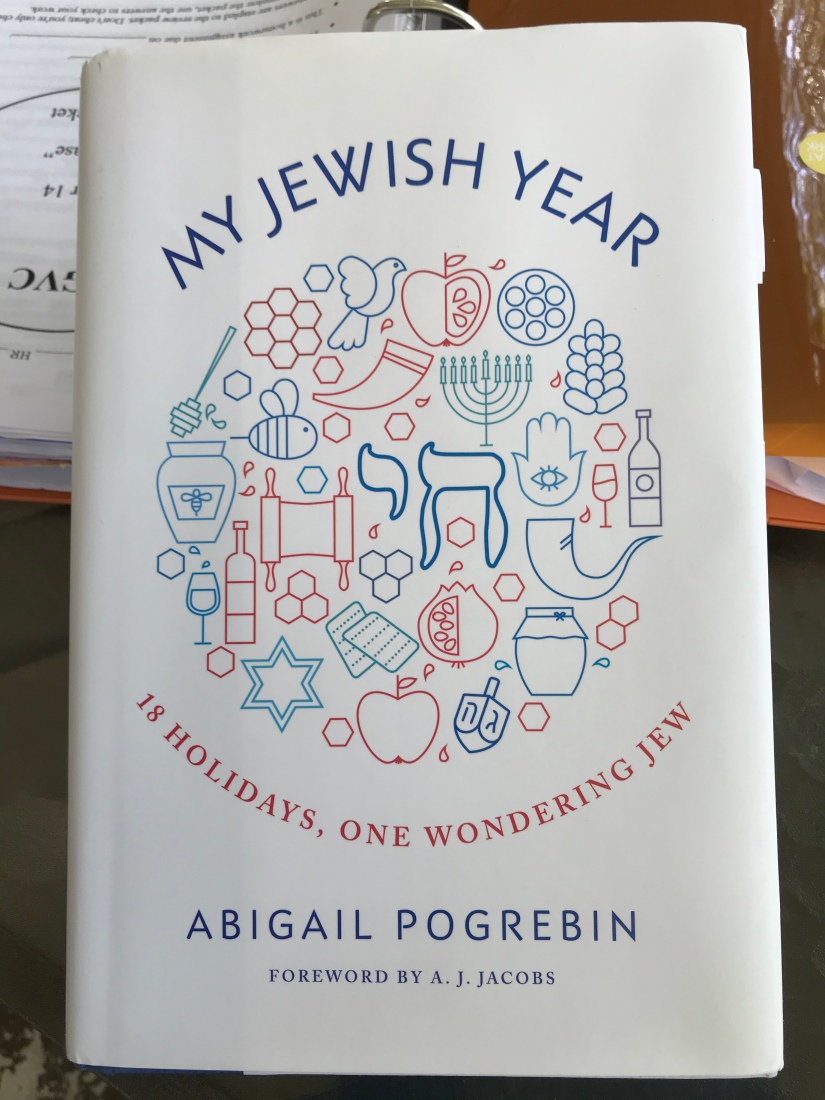 Abigail Pogrebin is a writer, former producer, and recovering temple president. (She doesn’t actually describe herself as recovering — and, in fact, her synagogue presidency at Central Synagogue in New York City began after the events described in this book — but I assume all temple presidents are, and ever will be, in recovery. I say this with deep gratitude to all of our past, present, and future KKBE presidents who I hope derive even a fraction of the inspiration their years of service bring to so many others.) She is also the daughter of Letty Cottin Pogrebin, whose Deborah, Golda, and Me: Being Female and Jewish in America would be another wonderful reading choice for this, or any other, time.

The premise of this book, My Jewish Year: 18 Holidays, One Wondering Jew, is this: Pogrebin, a modestly-observant lifelong Reform Jew, decided to spend a year “researching, observing, and writing about every single Jewish holiday on the calendar.” This would include the well known holidays, like Rosh Hashanah, Yom Kippur, and Passover; but also the lesser known (or at least observed) ones, like The Fast of Gedaliah, Hoshana Rabba, and Lag B’Omer. And the entirety of New York City — and occasionally well beyond — would serve as her laboratory.

An immersive experience… a quest… I’m a sucker for books like these. One of the more interesting I remember was My Jesus Year: A Rabbi’s Son Wanders the Bible Belt In Search of His Own Faith, by Benyamin Cohen, which I also recommend. And A.J. Jacobs, the king of immersive nonfiction — see The Year of Living Biblically: One Man’s Humble Quest to Follow the Bible as Literally as Possible, among others — happens to be a longtime friend of Pogrebin and writes the foreword to this book. One of my personal goals is to write a book about the experience of fulfilling a quest. Seeing as I have yet to figure out what my quest would be, it might have to be about the quest for a quest. But I digress…

“Shemini Atzeret is for me a day devoted to transition. It’s the day we come in from the sukkah—from feeling our vulnerability and our need for God’s protection—to live in our firm, sturdy house. Finally, no more holidays and we can get on with our lives. But then, what was the point of it all? Shemini Atzeret tells us—give yourself a day to transition back, to ask yourself: How am I going to integrate what I’ve learned and experienced this High Holiday season? It is a day that says: don’t let this be like coming home from a conference all fired up with new ideas, only to forget them the minute you step off the plane. It is a day that says: make sure that something gets brought back home.”

Considered this way, I can think of more holidays and experiences than just Sukkot that could use a Shemini Atzeret.

There was one moment in reading this book where my jaw literally dropped. The Tenth of Tevet — one of the six fast days which were, safe to say, not Pogrebin’s favorite part of the Jewish year — commemorates the beginning of the Babylonian siege of the First Temple in Jerusalem, whose destruction, along with that of the Second Temple, is memorialized on Tisha B’Av. Rabbi Yosef Blau, she writes, “believes there is a powerful lesson in marking the start of this devastation. We should notice the clouds; they could warn of an approaching tornado.”

“‘There’s a sense on the Tenth of Tevet that we should always be concerned about what things may lead to, instead of waiting for some tragedy to happen,’ Blau says. ‘We should be alert to the early stages of the process. The fact that we fast even for the beginning of the destruction, not just for the destruction itself, is probably a reminder that we should be sensitive to dangers even early in the game.’”

Reading this I was curious: When did the tenth day of the Hebrew month of Tevet fall this year (5780)? Hebcal.com (whose Hebrew/Gregorian date converter is a tool with which we should all be familiar) told me it was on January 7, 2020.

Even more curious now, I googled “CORONAVIRUS” and “JANUARY 7” and found this from the World Health Organization: “The Chinese authorities identified a new type of coronavirus (novel coronovirus, nCoV), which was isolated on 7 January 2020.”

Like I said: Jaw. Dropped. We should notice clouds and be alert to early stages of destruction. Indeed.

Yet regardless of the year, regardless of the circumstances, regardless of one’s depth of knowledge of the Jewish holidays, I do believe every reader will find something new in Pogrebin’s text. I admit I had been wary of this book. I thought the rabbi-name-dropping and famous-shul-shopping would potentially become, well, tiresome. But I found the former yields sort of a “greatest hits” of reflection on the themes of the holiday that I enjoyed and often flagged for future use. And the latter, though interesting and sometimes eye-opening, ultimately led Pogrebin to appreciate that, at the end of the day, it’s the special warmth and sense of belonging she finds in her own congregation that she values most.

And with that I wholeheartedly agree.

[Note: The book links I have included here will take you to Amazon, where we encourage you to use smile.amazon.com and choose Kahal Kadosh Beth Elohim as the beneficiary. However, I’d also invite you to look for these or any other books on the websites of your favorite Independent Bookstore. Many are shipping anywhere in the country right now and, like so many small businesses, can desperately use our support.]