On a “normal” spring day as gorgeous as the one on which I sit typing these words, there would be several, perhaps dozens, of visitors touring the historic grounds of KKBE. Thousands of visitors come to our congregation each year and we can’t wait until we’re able to throw open the doors and welcome them once again. Second only to the privilege and pleasure of worshiping in our gorgeous sanctuary, is the pride in showing it off to others.

More often that not, each tour is marked by certain key moments: (1) when visitors realize there have long been Jews in the South, before some states in the North even; (2) when they realize that, far from dying, our congregation is a thriving, bustling organization of roughly 500 households; and (3) the take-your-breath-away moment of entering our beautiful worship space. Having just completed our restoration at the very moment our stay-at-home efforts to curtail this pandemic began — oh, to be able to hear those gasps now!

But there’s a fourth moment, too; a moment every one of our docents knows is coming in one way or another. The moment of wrestling with slavery.

Often we’re just asked for the facts: “Did the Jews in this congregation own slaves?” The answer is yes. Sometimes few, sometimes many. Sometimes they “offered” the labor of the individuals they enslaved as a contribution to the synagogue. It’s distressing and upsetting and shameful, but those are the facts. Other times we’re asked to rationalize: “How could Jews have owned slaves?” “How could Jews have supported both a synagogue and slavery?” For Sue Eisenfeld, author of Wandering Dixie: Dispatches from the Lost Jewish South, the question is this: “How could the Jews, who celebrate their freedom from slavery in Egypt each year at Passover, have fought for the South, for the side of slavery?” (p. 5) 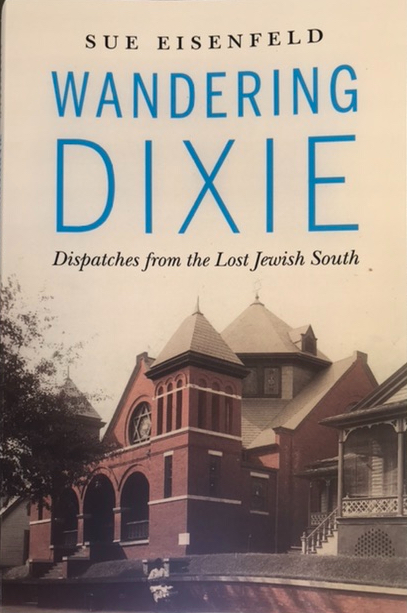 It’s this question as much as any other that sets Eisenfeld on a journey across the South, seeking out stories of both Jews and African Americans, past and present. As a whole, I’m not sure all of the pieces come together. It’s a lot to cover — both geographically and thematically — and, at times, it seems she’s bitten off more than she can chew. Of course, I’m biased. Four of our KKBE congregants appear in the book: Anita Rosenberg, Michael Kogan, Robert Rosen, and Harlan Greene. And while each of them (the first three, especially) get quite a bit of ink, I know their views and ideas to be more nuanced than what is there.

Eisenfeld also loses the thread of her opening question, and the fact is her question, like the others we regularly hear about slavery at KKBE, is relatively easy to answer. How could Jews have participated in the institution of slavery? How could they celebrate their own freedom at Passover while simultaneously enslaving others? How could they fight a war to continue to have the opportunity to do so? The answer is this: They lost sight of, or willfully ignored, the humanity of others.

What makes someone fail to see the humanity in another, to recognize him or her as a brother or sister? Well, that is a much more difficult question. But we know it happens. It happens with refugees and asylum seekers. It happens with impoverished youth and the elderly. It happens with those of differing gender identities. And it continues to happen when people only see the color of another person’s skin, and when they refuse to see color at all. The better question is how do we train ourselves to see differently; to affirm and value the humanity in each and every person we meet?

Someday our congregation will once again open its doors. (It will happen!) Worship will resume in the sanctuary and tours will welcome visitors from near and far. When we do, it is my hope that a new plaque will be affixed outside our sanctuary and seen by all. A task force has been working on this for some time and while the language is still a work in progress, the sentiment is not:

There is no atonement for transgressions of one human being against another until that person has reconciled with the other. (based on Mishnah Yoma 8:9)

This sanctuary, dedicated in 1841, replaced an earlier structure that burned in 1838. The first Reform synagogue in America, it was constructed by a Jewish builder, whose skilled workers included enslaved African Americans. Upon the renovation and rededication of the building in 2020, Kahal Kadosh Beth Elohim rededicates itself to recognizing the errors of the past and reconciling the beliefs of our faith with our actions, as we commit to spiritual growth and social justice for all.

I can’t explain to visitors, or myself, how our forebears lost sight of the humanity of an entire race of people whose lives were — should have been — just as valuable as their own. I don’t think any of us can. But we can do this: We can acknowledge it happened. We can recognize the ways in which it continues to happen. And we can commit to do all we can to chart a new course.